Witch Hazel is a flowering deciduous shrub in the Hamamelidaceae family native to North America; three other varieties of the shrub are also found in China and Japan. The tree rarely grows taller than 25 feet and is often found in the damper forests all across the Eastern United States and Southern Canada. The leaves are alternately arranged, oval shaped, and have a broadly scalloped, wavy margin with an asymmetrical leaf base. They’re a vibrant green most of the year but turn a golden yellow in the fall. The trunk is branching and the bark is smooth and brownish grey, accented with darker spots. Hamamelis virginiana blooms fragrant yellow to red flowers with strap shaped petals in the fall after the leaves have fallen off. Other varieties bloom through the spring, but before leaves emerge. The fruits, which are small, two part capsules that split explosively, ripen rather unusually the following season alongside the new blossoms. The glossy, edible black seeds are snapped out of their capsules and flung through the air in a distance of up to 30 feet, earning the understory shrub another common name of ‘Snapping Hazel’. The leaves should be gathered in the summer and need to be dried quickly, where as the bark is typically harvested in the spring after the leaves sprout.

Medicinal Uses
Witch Hazel is an astringent, anti-inflammatory, hemostatic, and styptic herb. It’s high in tannins, which have a drying, tightening affect on the skin while promoting healing and reducing swelling. Typically, Witch Hazel is found in a distilled form, which is commonly used as a toning and cleansing astringent for skin irritations, insect bites, sunburns, acne, damaged blood vessels, minor bleeding, and superficial cuts. It’s also useful for treating bruises, inflamed swellings, irritated eyes, varicose veins, and hemorrhoids. Internally, it can be used to control diarrhea, excessive mucus, and ease dysentery, as well as helping to stop internal bleeding. Witch Hazel tea is also a good gargle for sore throats and tonsilitis.

Folk Uses
Many Native Americans used Witch Hazel poultices and bark decoctions to treat tumors, inflammations, small wounds, and took the herb internally to ease heavy menstrual bleeding and hemorrhaging. It was brought to Europe in the 18th century, where it gained popularity as an astringent for the skin and to control both minor external and internal bleeding. The twigs of the shrub were commonly used as divining rods, similarly to how hazel twigs were used in England, which may also have influenced the “witch” part of the name. “Witch” in Witch Hazel has its origins in Middle English wiche, meaning ‘pliable’. The name was used in England for Wych Elm, or Ulmus glabra, and American colonists arriving in the Americas adopted the familiar name to the new shrub.

Dosage
1-2ml of tincture, or 1 teaspoon of dried leaves per cup of water, infused for 10-15 minutes and taken three times daily. Distillation should be used topically. The dried herb can be used liberally as needed in preparations of face masques, liniments, ointments, toners, washes, and creams.

Combinations
For easing hemmorhoids, Witch Hazel combines well with Pilewort. As a external dressing for wounds, pain, and abrasions, the powdered herb can be combined with honey or ground flaxseeds. 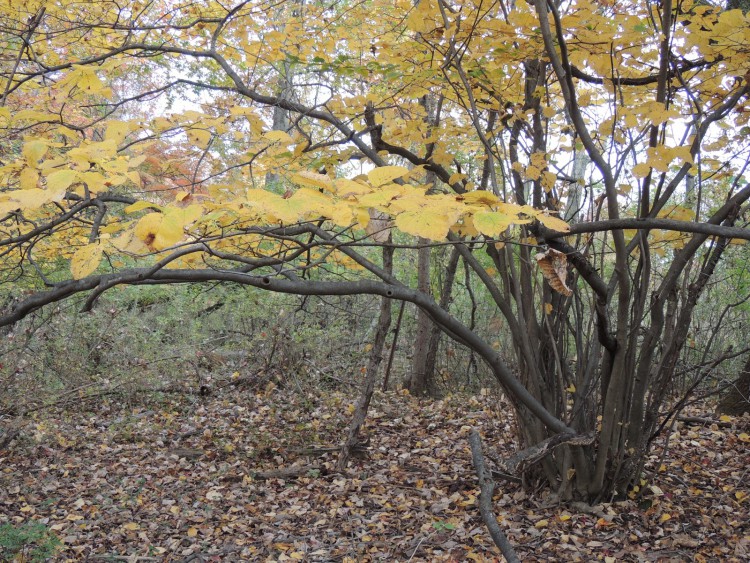 A Witch Hazel in the autumn; note the multiple branches.

A closer view of the scalloped, asymmetrical leaves.