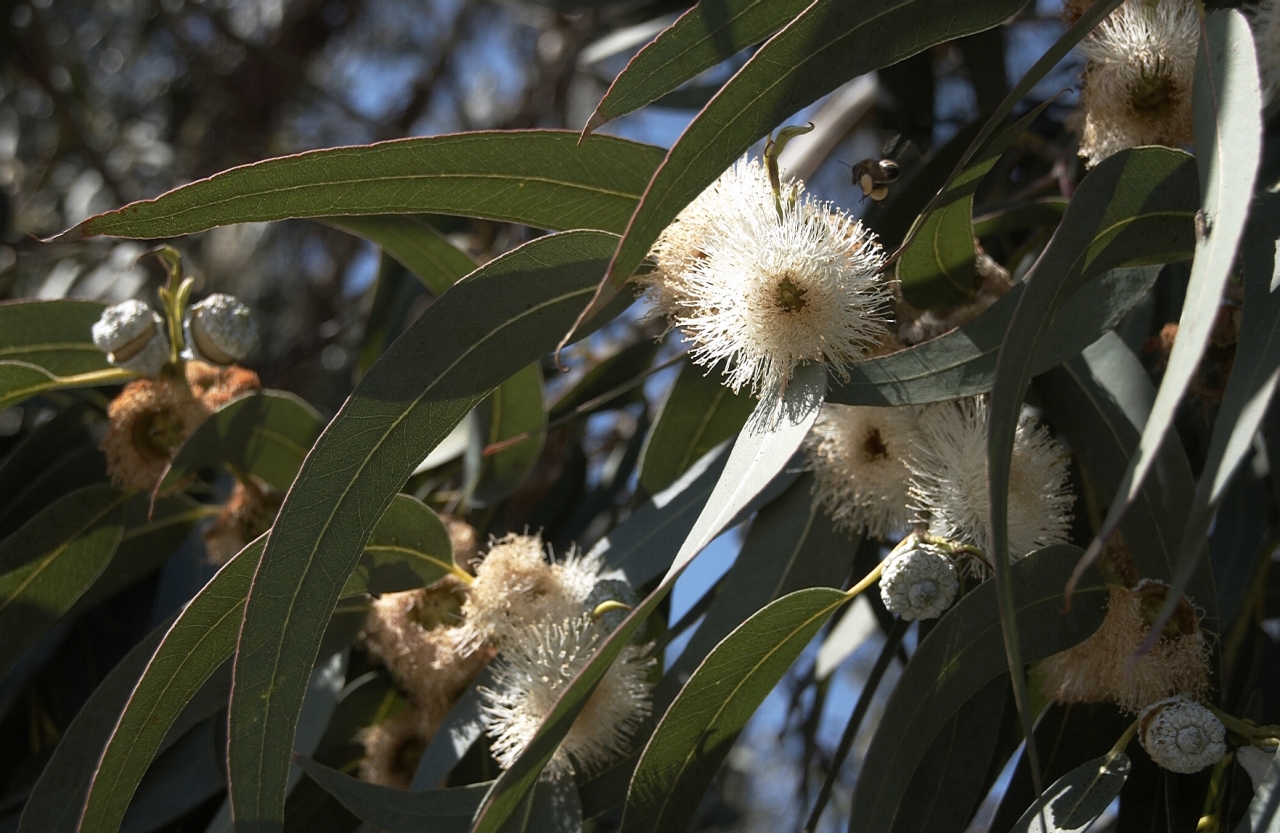 There are over 500 species of Eucalyptus trees, but the most common, sometimes referred to as Blue Gum, is a tall evergreen tree native to Australia and Tasmania in the Myrtaceae family that grows in most loamy soils with adequate water. It’s commonly found rampantly growing in California and parts of the Southern United States, where it can pose a problem to the local ecosystems. The combination of Eucalyptus being so fast growing and the leaves and roots containing volatile oils that prevent the growth of anything but other Eucalyptus in the undergrowth results in vast Eucalyptus forests eradicating native landscapes. It can grow over 300 feet in height and is distinguishable by it’s peeling multicolored bark, and strong, crisp, aromatic smell. The leaves of the young trees are opposite, sessile, soft, and oblong shaped with a dusty blue color. As they mature, the leaves become alternate, petioled, leathery, and lanceolate. The flowers are solitary, axillary, and white, have no petals, and have a woody calyx. The fruit is a hard, wood, four celled many seeded capsule enclosed inside this calyx.

Medicinal Uses
Eucalyptus is an antiseptic, antibiotic, deodorant, expectorant, and a stimulant. It’s great for respiratory ailments such as coughs, excessive catarrh, bronchitis, congestion, and asthma. It’s primarily used as an essential oil, which stimulate the bronchioles of the lungs and can ease nausea and headache. The fresh leaves can be prepared as an infusion, or steam for clearing the lungs and sinuses. Eucalyptus is also made into lozenges, and can be mixed with slippery elm bark and made into an emulsion taken internally for tuberculoses and other infections of the lungs. It can also lower blood sugars, ease indigestion, and cool fevers and the flu. Externally, the seemingly cooling oil can have a warming, pain-relieving and stimulating effect. It can be combine with olive oil or sesame oil and used on sore muscles and stiff joints, blood congestion, and to help stimulate circulation and prevent infections of small cuts and burns. Due to it’s intensity, it may have a rubifacient effect in sensitive individuals. It’s also added to cosmetics such as deodorant for it’s pleasant smell and antibacterial qualities.

Folk Uses
Australian aboriginals used Eucalyptus to bind wounds and cure fevers. The roots were chewed as a water source during dry season, as they have the ability to store large amounts of water. The scent is very popular in perfumes and aromatherapy. One varietal of Eucalyptus, Eucalyptus deglupta, or Mindanao Gum, is used in the Philippines to as a rejuvenating tonic and to reduce fatigue. Eucalyptus oil and the fresh branches are also known to repel cockroaches. The tree’s medicinal qualities became popular during the 1800’s when ship crews discovered they could cure fever, earning Eucalyptus the name “Australian Fever Tree”. It was shipped around the Mediterranean as a cure for malaria and fever. It did not, in fact, cure malaria. The trees were just planted in swampy areas of the Mediterranean, where they proceeded to suck up all the water, draining and drying out the marshes and swamps that the malaria carrying mosquitos (and many other species of plants and animals) had thrived in. The oil became popular in European hospitals as an antiseptic, while the early American physicians used it to treat respiratory infections, nausea, and sore throats.

Dosage
As an infusion, 1-2 teaspoons of dried herb (or to taste) per cup of water, steeped for 10 minutes, taken three times daily. As an ointment, rub directly on the chest or affected area, carrier oil optional. For local application to sores and wounds, mix one ounce of oil per pint of lukewarm water and apply as needed. 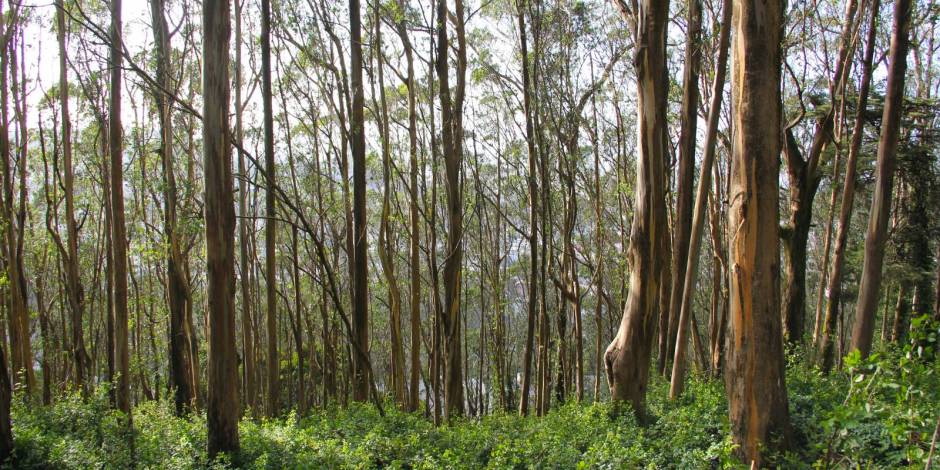 The peeling bark of the Eucalyptus 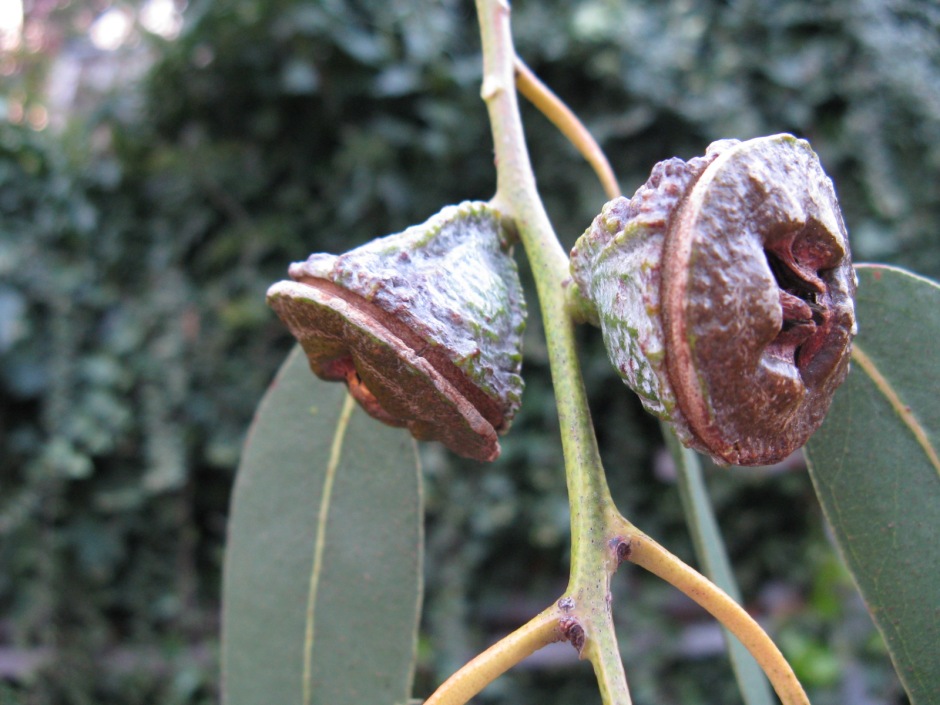