Kelps are large, fast growing brown seaweeds in the order Laminariales, which includes 30 genera, the most commonly used of which are Laminariaceae. Kelps grow in underwater forests in shallow, nutrient rich oceans. The body of most Kelps, or thalus, consists of flat leaf-like structures known as blades, which originate from elongated stem-like structures called stipes. The holdfast, a root-like structure, anchors the kelp to the ocean floor. Buoyant, gas-filled bladders, or pneumatocysts, form at the base of blades of American species of kelp, keeping the blades close to the surface. If wild-harvesting, do not wash with fresh water before drying. Clean, dry, and then rinse when rehydrating.

Medicinal Uses
A cooling nutritive tonic that is high in iron, potassium, iodine, and other trace minerals, kelp has a wide range of health benefits and cleanses the body, primarily through the sweat glands. It is both a demulcent and an expectorant and gives tone to blood vessles, benefitting the circulatory system and reproductive organs. It’s diuretic and alterative qualities also help to build healthy hair, skin, and nails. Kelp raises metabolic activity and is used as a weight loss aid, as an anti-goiter remedy, to control high blood pressure, as a bulking laxative for constipation. It’s used in the treatment of both cancer and radiation sickness, and is widely thought to be a cancer preventative. Preliminary testing has shown promising antiviral results in preventing infection of diseases such as HIV and herpes. Healthcare providers sometimes use Laminaria to expand the cervix before certain medical procedures. A layer of laminaria is placed directly inside the cervix which enlarges it before procedures such as dilation and curettage (scraping of the uterus), removing IUDs, or to place radium for cancer treatment. Some midwives use Laminaria for pregnant women to ripen the cervix to make labor and delivery easier, and also to cause abortions during the first three months of pregnancy. In Chinese Medicine, the variety Laminaria saccharina, or Sweet Wrack is given to disperse hard lumps, swollen lymph nodes, enlarged thyroid glands, painful testes, and tumors.

Folk Uses
It’s a popular additive to organic fertilizers because of it’s high nutrient levels. It’s also processed into alginate, which is used to stabilize ice creams, jellies, mold making artist supplies, hairspray, cosmetics, water softeners, and other foods. Historically, it was used as fuel, a winter feed for cattle, and as a source of iodide and potash. It’s also eaten culinarily worldwide, but primarily in Asia, where it is used as a garnish, appetizer, broth base, and in snacks.

Dosage
While there is no official doses for kelp, because of it’s high levels of iodide, it should be eaten in moderation. Too much iodide can lead to hyper or hypothyroidism. 150 mcg per day is the recommended safe dose for the average adult, or a culinary amount. 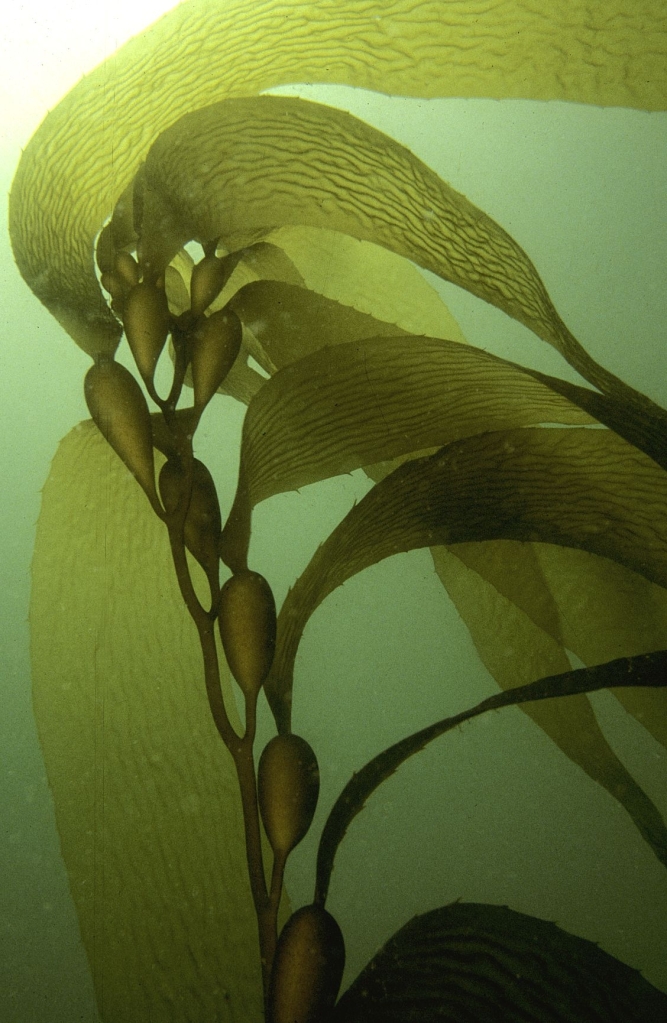