Anise is an annual plant cultivated worldwide in the Apiaceae family native to the eastern Mediterranean region and Southwest Asia. It has spindly, woody roots, grooved round branching stems that grow several feet in height. The leaves differ in appearance throughout the plant, with the lowest leaves being round cordate with long petioles, the middle leaves being pinnate and feathery, and the upper leaves having narrow lobes. Anise has small umbels of white summer blooming flowers that mature into brown ovate schizocarp fruit in the early fall. The entire plant is aromatic and sweet tasting. Anise plants grow best in light, fertile, well drained soil, and the seeds should be planted as soon as the ground warms up in spring. Because the plants have a taproot, they do not transplant well after being established.

Medicinal Uses
Anise seeds are an expectorant, anti-spasmodic, carminative, galactogogue, parasiticide, and an aromatic. The volatile oils found in anise seeds eases griping, intestinal colic, and flatulence, as well as functioning on the lungs as an expectorant and anti-spasmodic. These qualities make anise a valuable herb not only for intestinal and digestive distress and improving appetite and digestion, but for bronchitis, tracheitis, persistant irritable coughs, and whooping cough. The seeds also improve milk flow for nursing mothers and can help the onset of menstruation, as well as improving libido and easing childbirth. Externally, the oil is anti-parasitic and can be used in the treatment of scabies and the control of lice. For intenstinal issues such as intestinal colic and other digestive issues, anise combines well with equal parts fennel and caraway. For respiratory issues, it combines best with coltsfoot, horehound, and lobelia. Aniseed is considered warming and stimulating.

Folk Uses
Anise is used culinarily worldwide, but is especially popular in Arabic, European, and Indian cuisine. The Romans used anise as an after meal digestive. Often the seeds are added crushed or whole to desserts, candies, pickles, curries, and is a flavoring base for spirits such as Pernod, Absinthe, Anisette, Ricard, Ouzo, and Arrak. The flowers and leaves are added to both vegetable and fruit salads, and the stems and roots are used in soups and stews. Anise oil is often added in small amounts to toothpastes, perfumes, and mouthwashes. According to Pliny the Elder anise is a folk remedy for insomnia, when chewed with little honey in the morning freshens the breath, and when mixed with wine makes a remedy for asp bites. Anise is also made into a liquid scent used on fishing lures to attract fish. In Britain, builders of steam locomotives incorporated capsules of aniseed oil into white metal plain bearings, so that in the event of overheating the distinctive smell would give warning.

Dosage
An infusion of 1-2 teaspoons of gently crushed seeds per cup of water, covered and steeped for 5-10 minutes, taken three times daily. The seeds should be crushed just before use to release the volatile oils. Anise seed oil can be used externally, or internally. Internally, one drop mixed into half a teaspoon of raw honey, three times daily. In large amounts, the oil is highly toxic. A tincture of 2-4ml can be taken three times daily, and a decoction can also be made from the seeds. Aniseed is a good blending herb, useful in sweetening other formulas. 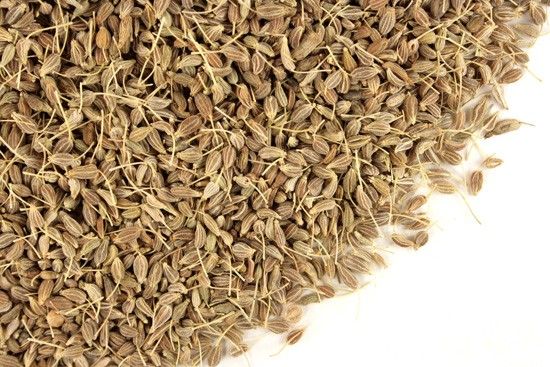 The seeds of the Anise plant.