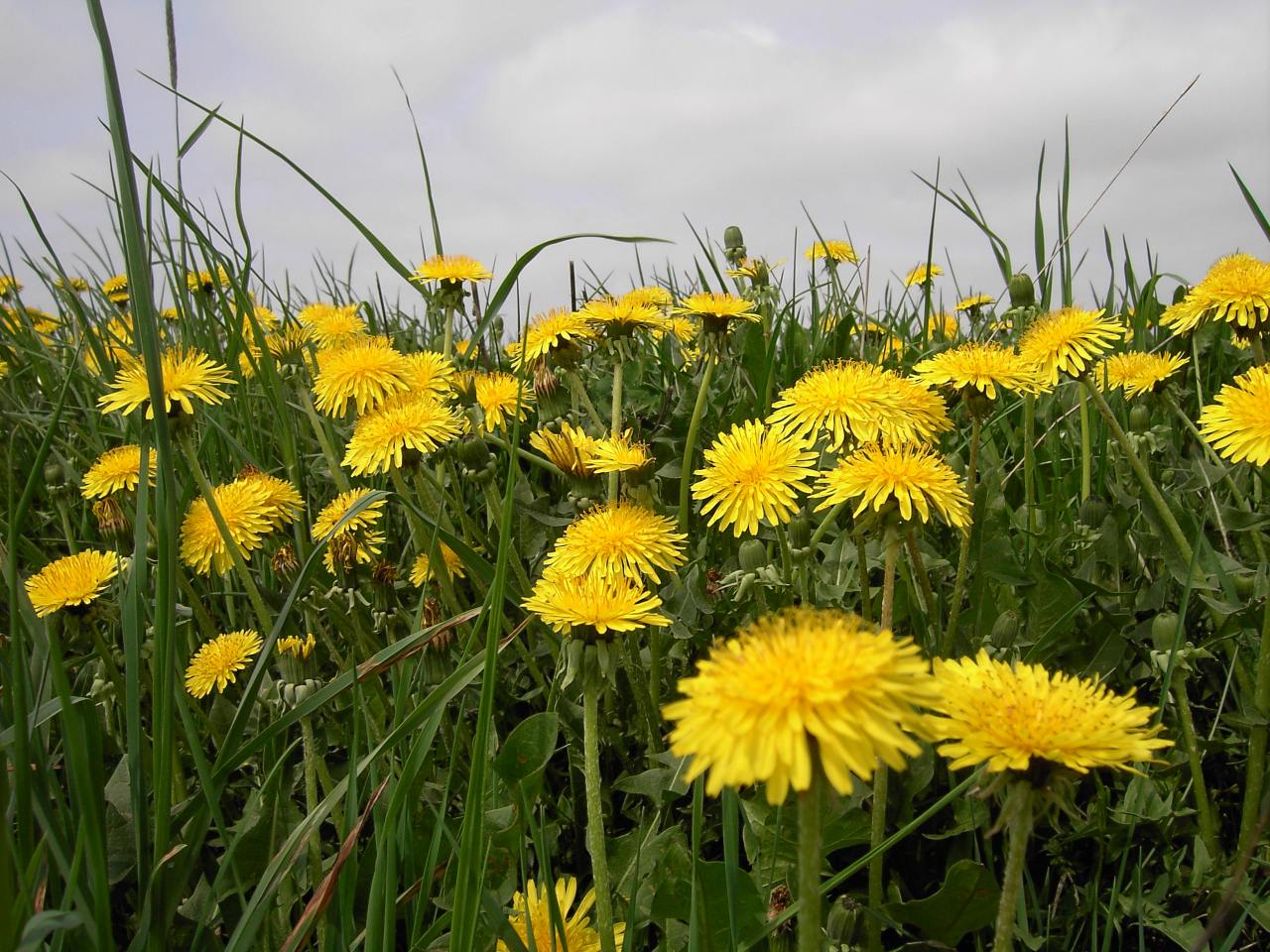 Dandelions are a large genus of the family Asteraceae, with hundreds of known species worldwide. Taraxacum officinalis is the most common, best known as weeds, but horticulturally, they are incredibly beneficial to your garden. Their taproot draws minerals up for plants with shallower roots and is a nitrogen fixer. It attracts pollinators like native bees, butterflies, and moths, and releases ethylene gas, which helps to ripen fruit. It’s also incredibly easy to grow, and can tolerate a wide range of soil conditions and moisture levels and is found world wide, most commonly in disturbance areas. Dandelions are pretty recognizable, with their composite, usually yellow flowers (some varieties are pink, white, or pale yellow) consisting of many tightly packed florets surrounded by two rows of bracts. These flowers are open during the day and close at night, and sprout from the center of a rosette of simple basal leaves that can be smooth or lobed like “lions teeth” – the plant’s French namesake (dent de lion). As the seeds develop, the petals dry and fall off within a day or two, exposing the bracts, which bend to open and the characteristic white sphere of fluff is formed, to be dispersed in the wind. The roots are typically harvested in the summer, when the roots are the most bitter. It is best to split them lengthwise before drying.

Medicinal Uses
The leaves and the roots of the plant are all used as a diuretic, bitter tonic, cholagogue, anti-rheumatic, laxative. It stimulates the kidneys and is high in potassium, which helps protect the cardiovascular system as the renal system is flushed. It is also used in treatments for inflammations and congestion of the liver and gallbladder, and is helpful with muscular rheumatism and detoxifying the blood. In Aryuvedic tradition it is helpful for detoxifying breast problems, such as breast sores, tumors, cysts, and swollen lymph glands. It’s bitter elements aid in digestion, stimulating the flow of bile and breaking down fats while aiding in elimination, and when combined in a decoction with ginger, makes a great after meal digestive tea. It can also ease bloating and water retention due to PMS and help to lower blood pressure. The root can also be found roasted, which gives it a fuller, richer, and almost nuttier flavor than the raw dried root, which is earthy and bitter.

Folk Uses
Chinese physicians have long prescribed dandelion for colds, bronchitis, penumonia, hepatitis, boils, obesity, dental problems, and internal injuries. Poultices of the chopped leaves were used to treat breast cancer. Aryuvedic physicians used the herb similarly, but the Arab physicians were the first to recognize it’s diuretic properties. Europeans in the middle ages believed in the Doctrine of Signatures – that the physical characteristics of a plant were linked to it’s healing properties. Through this, they believed dandelion to be a cure for jaundice and gallstones due to it’s yellow color, and that it increased urine flow, due to it’s juicy roots, gaining it the popular names “dog-pisses” (translated from Italian) and “piss-a-bed”. When the colonists arrived to North America, they introduced dandelion to the Native Americans, who quickly adopted the herb as a tonic. It was widely known at the time as “the official remedy for disorders”, hence it’s latin name – Taraxacum – from the greek taraxos (disorder) and akos (remedy). The leaves can be dried or eaten fresh in salads and can be collected year round. One salad recipe that I really like is a balsamic reduction dressing with figs, dandelion greens, candied pecans, and goat cheese (prosciutto optional, and sooo good).

Dosage
The fresh leaves can be eaten liberally raw. The root can be prepared as a decoction, with 2-3 teaspoons of the dried root per cup of water, simmered for 10-15 minutes, drunk three times daily, or as a tincture of 5-10ml three times daily. When dandelion root is combined with yarrow and couch-grass, it makes a good remedy for water retention.

Main image from Under The Linden Tree